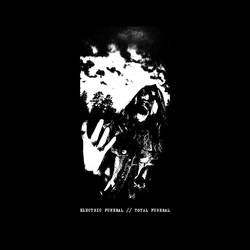 Total Funeral is the entire anthology-to-date of Electric Funeral, the one-man Swedish raw punk hobbyhorse manned by Jocke D-Takt. It's some of the filthiest, noisiest, and most pissed-off, bludgeoning D-beat your ruptured eardrums will have the pleasure of suffering through this year. Pure hatred, anguish, and dissatisfaction—the true spirit of punk rock bleeds through on every song. There's no questioning the authenticity here. And From a completest standpoint you have all of this material in one place, which makes it easy to track Electric Funeral’s evolution from release to release.

It should be noted though that when we talk about D-beat in terms of evolution, were talking more about subtle nuances than we are noticeable shifts in sound or overall growth as an artist. D-beat is D-beat after all. The Make Noise Not War songs have a fuller guitar sound than Harvester of Death ones, while the three tracks from the split with Go Filth Go are more structured and crunchy and the vocals come in two styles of scream instead of one. D-Beat Noise Attack is a lo-fi, muffled recording that brings to mind an old Deprived / Masskontroll split cassette I've had kicking around the floor of my car underneath all the empty chip bags and chocolate milk containers. And it doesn’t get much more blown-out than the ear-piercing white noise on the Gröndalen songs.  ...read full-length review here.