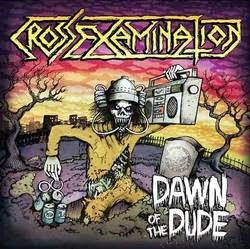 Sometimes I just want to eat a bunch of pizza, drink a 30 pack of Special Export Light, smoke one million doobies, make out with chicks in a swimming pool, stay up all night tripping on mushrooms while watching hippies swirl glow sticks and eat fire, and then make out with more chicks in a tent as the sun comes up. And sometimes I’m way too old and way too married to actually do those things anymore, so I just want listen to a record that reminds me what it was like to do those things. Dawn of the Dude is that record.

This is some straight up dumb-as-shit crossover thrash from St. Louis, MO. And when I say dumb-as-shit I say it with complete adoration. Cross Examination put out one of my favorite band debuts of all time with their Hung Jury 7” back in 2006. This is their first new material since 2008 and I am happy to report that nothing has changed. Speed metal riffs, party references galore, movie samples, and song titles with the word "thrash" in them. (See: “Subterranean Thrash Assault.”) Speaking of song titles, if names like “Ritual Snackrifice” and “The Bluntacolypse” don’t give you a clear idea of what’s going on, please refer to the opening paragraph of this here review once more.

In summation, I’d like to quote a line from “The Bluntacolypse”: “A squad of totally sweet-looking party dudes have emerged from the chaos…there’s smoke everywhere…it’s a blunt…THEY’RE SMOKING A BLUNT!”

The Awesome Party Squad is alive and kicking, bros. Get into it.