This review is an excerpt from issue #8 of The Soda Killers fanzine. We still have copies available. Let us know if you want a copy and we'll get it out to you ASAP!
-BNB

Here’s a dope collection of cassette rips put together by Megakut labelhead Luke Sick that will remind you of what it was like to be a passionate young kid making tapes of your favorite shit back in the day and then giving them to people.

What I really like about this particular mix is that it’s a tribute-like labor of love to the genre rather than a sampler put together to promote the releases on his label. Not that that would be a bad thing; just saying it’s cool to see someone do something in this age of social media me-me-me-ness that isn’t just another shameless self-promotion project to post on Facebook and Twitter (which I am 100% guilty of all the damn time.)

This collection comes with a DIY zine-like insert that explains what each song or snippet is and a story of where it came from. Like this for example: “Main Source Live Mountain View, CA ‘Louder than the U.S. Air Force!’ (KMEL 106.1 FM Summer Jam, sometime between ’89 – ’91. Probably taped off the radio by my sister, Jessica; I recognize her handwriting on the label.) Super dope performance.”  He also goes on to describe which types of blank cassettes were used for the original dubs. Like this: “Dubbed from Side B of the Blabber Simple Pleasures demo with the yellow label. Cr02 [No noise reduction].”

It’s especially cool because outside of Main Source and Wu-Tang Clan, I’ve haven’t heard most of the stuff on here – Supermarket, Connect 4, Gang of Textbooks, Joseph Young & Anonymous, etc. One of the best tracks is “Give You a Rundown” by the West Bay group The 1628 Factor, which was ripped from the ’01 tape Not 4 the Money: The Low Cash Factor. (I’ll take a dub of this if anyone has one. Same with the L*Ron stuff that’s on here.)

It is my understanding that there this is only a limited run of Kutty Tapes and they were given to select folks, so I’m not sure how easy it would be to get your hands on this. If you’re interested, send me a blank cassette or a CD-r and I’ll dub one for you. (I have permission!) Also, shoutout to the comic book cut ‘n’ paste cover which is designed in a way that could be folded into your choice of two J-cards options. Now go make your own mixtape! 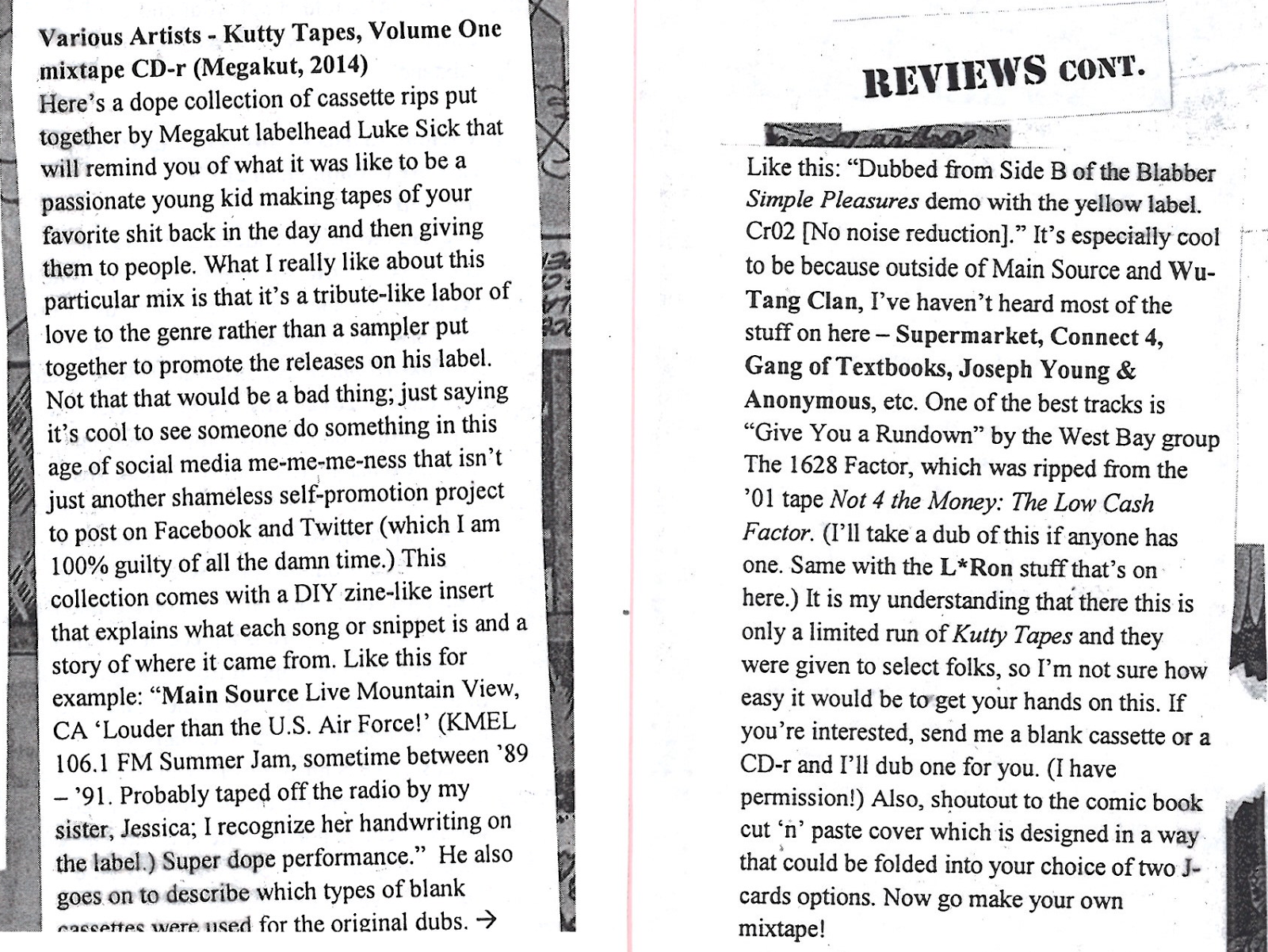