Scene Report: Babes in Toyland at Rock the Garden 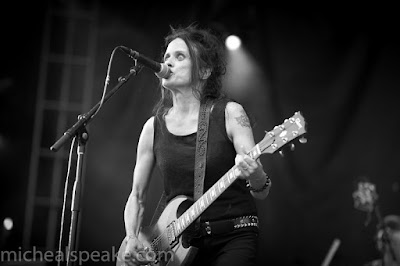 It’s difficult for me to write about Babes in Toyland without sounding at least a little bit gushy. Like other local-ish acts from their same era that made waves beyond the confines of the Twin Cities (Bob Mould, Soul Asylum, The ‘Mats) Babes had a lore about them that was intriguing and important to a north woods-dwelling punk rock-craving youngster like myself. There was Lollapalooza in the Civic Center in 1993, the uncountable suicide runs to see them play First Avenue—down from Bemidji and back up again in the same night, just in time to make it to class the next day—and the last local reunion back in 2001. And then there was the birthday message from drummer Lori Barbero that I saved on my phone for so long that it was eventually deleted when it exceeded the allowed number of days. To say I was excited to see them play again for the first time in 14 years would be a bit of an understatement.

Following a spirited set by Seun Kuti—son of revered Afrobeat artist Fela Kuti, and brother of Femi Kuti—who, playing alongside his father’s old backing band Egypt 80, performed the best hour plus of music Rock the Garden had to offer up until this point (rivaled only by the previous night’s headliner Belle and Sebastian) the trio took to the stage to an eagerly awaiting audience.

Things got off to a jittery start with “Bruise Violet” when the three sort of fumbled over each other. It wouldn’t be the last misstep of the evening, but that mattered little, as every time they were able to laugh it off and get right back into things without must disruption. And if a lyric was missed, and there were a few, the crowd filled in for them.

Barbero took to the mic early to express her gratitude. “Minneapolis is the place to be today. I promised I wouldn’t cry.” Then with a slight tremble, “But that’s going to be really hard.”

Following along the Fontanelle tracklist, they played an inspired version “Right Now”, which had some of the elders abandoning their positions near the front of the stage; amidst a cloud of dust they turned and headed for more stable ground further up the hill.

And then it was singer-guitarist Kat Bjelland’s turn to speak. “It’s nice to be here. We missed you. Our kids are here.” She paused to point out bass player Maureen Herman’s daughter and her own son (who could be seen headbanging stage-side throughout most of the set) before stating, “I’m really happy.”

They pounded through a lengthy set that drew heavily upon the three releases that this “classic” lineup of Babes recorded: Fontanelle, the Painkillers EP, and Nemesisters. Seeing them play songs like “Handsome and Gretel” and “Sweet ‘69” in the blazing hot sun conjured fond memories of the alt/punk festival boom of the ‘90s that Babes in Toyland frequented.

During “Spit to See the Shine”, one of two tracks in set from the To Mother EP, Bjelland really let go with her signature wails, showing her vocal capabilities haven’t lost any steam over the years. It’s awesome to see the song that inspired a 2006 retrospective collection of Twin Cities bands featuring women (Spit To See The Shine: Twin Cities Women Who Rocked 1987 – 1998) take such a prominent role in the set.

Despite their outwardly bombastic sensory assault Babes in Toyland were always sneakily groovy. In the live setting songs like “Drivin’”, the lone track featuring Lori on vocals, and “Vomit Heart”, from their debut album Spanking Machine, Herman and Barbero’s pulsing rhythm section is fully realized. The first crowd surfer of the evening appeared during the latter.

It was heartwarming to see all the young people, especially the young women, making moves to get near the front. Even more so to see adults making the necessary room for them rather than posturing with the whole “I was here first” thing that happens all too often among the arms-folded crowd. Babes in Toyland were a fierce favorite to young people and catalyst for female empowerment the first time around. There’s no reason they shouldn’t be some 20 plus years later. Perhaps even more so now, given the things each of these women have experienced in the time that’s passed since then.

They wrapped up their set with “Dust Cake Boy” and came to the front to take a sheepish bow. Barbero, always the gracious one, hung back to take photos of the audience with her giant pink-cased cell phone. And the only smile that was bigger than Lori’s was my own.