Scene Report: Belle and Sebastian at Rock The Garden 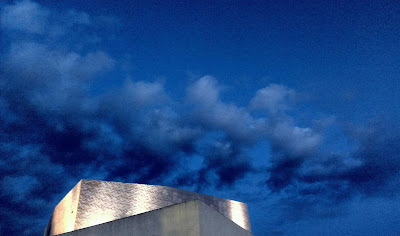 As a hot and humid day began its turn towards much needed cooler temperatures, Scotland’s baroque pop sweethearts Belle and Sebastian took the stage to close out the first day of this year’s Rock the Garden; an annual weekend of music hosted by the Walker Art Center and 89.3 The Current.  Stuart Murdock, draped in his signature black and white striped longlseeve, and company started things off with “Nobody’s Empire”, a single from this year’s Girls in Peactime Want to Dance. Pausing for a brief acknowledgment from the crowd, they transitioned effortlessly into “I’m A Cuckoo” from 2003’s Dear Catastrophe Waitress, which had even the most worn out folks up and dancing.

Murdock took a moment to address the audience, stating, “This is my kind of party. I do like a garden party. It’s very civilized.” And that couldn’t be any truer. For an event that’s taken some heat from critics in the past for playing it too safe (known by its detractors as “the yawn on the lawn”), this year’s first day lineup—including thestandard4rd, Lucius, Courtney Barnett, and Conor Oberst—wasn’t exactly a raucous one. (Fret not punkers, Babes in Toyland reunited for a co-headlining slot on Sunday.)

The crowd really started heating up by the time they played “The Party Line”, the disco-ish track from their latest album, which was followed by “Another Sunny Day” from 2006’s The Life Pursuit. Security took it upon themselves to douse the welcoming front row with cold water. Recognizing that they now had the audience in their palms the band took to the mic to share some crowd-popping anecdotes. “I went swimming in Cedar Lake today”, said guitarist Stevie Davis. Murdoch followed up with a quip about the (rumored) longstanding Minnesota tradition of “cornholing.”

While it was all teens and twentysomethings up front, when taking a look around the vast amount of people populating the hill the generational gap became more apparent. It's hard not describe the older contingency without using the tired “aging hipsters” axiom because by and large, that’s who it was. (Present company included.) Salt ‘n’ pepper bearded rad dads in faded Twin Tone Records tees and selvage denim; women in colorful printed slouch necks, large-brimmed hats, and Egyptian-style sandals. And then there’s their children; sporting oversized protective earmuffs while hanging in dad's BabyBjörns or playfully prancing around on Aztec-print blanket with mom. Rock the Garden, like many of Twin Cities events of similar ilk, is a people-watching goldmine. And if you were looking close enough you'd have spotted Woody Harrelson making his way down the hill mid-set. (He's in town filming a movie.)

The band, which had swelled in size to include local orchestra accompaniment, played a trio of songs that included two new ones and an older crowd favorite. “The Model” (Fold Your Hands Child, You Walk Like a Peasant, 2000) was sandwiched between “Cat with the Cream” and “Perfect Couples.” During the latter Davis retooled some lyrics to give them a local albeit clichéd flavor. “He was from Minneapolis; she was from St. Paul. He liked Prince; she liked the Replacements. But they both had an affinity for Spider John Koerner!”

The rest of the set included songs that spanned their catalog, with a focus on recent works, but the most magical moment of the evening came during the second to last song. It was the perfect convergence of sensory awareness, as day had given way to night completely, and the lighted backdrop of our beloved Minneapolis shone bright: the Basilica and downtown skyscrapers to the right; a crescent moon and three bright stars to the left. A large group of fans were invited to the stage to boogie alongside the band as they performed a stunningly beautiful rendition of “The Boy With the Arab Strap.”

They played one more and the day wrapped up as most festivals in Minnesota do at the end of the night: with everyone scrambling to cash in those remaining tickets on footlong corndogs. Civilized indeed.