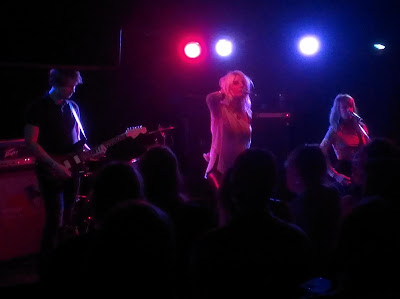 Abandoning my beloved NBA Finals, I bounced somewhere during the third quarter and rushed downtown to catch White Lung. Upon landing in Minneapolis tonight the four-piece were at the mid-way point of their current North American tour. The first handful of gigs was alongside the recently reformed Refused, but tonight’s show, like the majority of the tour, they were supported by So-Cal longhair quartet Obliterations.

Obliterations are made up of guys from Black Mountain, Saviours, and Night Horse. They released an album on Southern Lord last year that I never got around to listening to. And unfortunately tonight I arrived at the 7th St. Entry towards that tail end of their set; only catching two and a half songs. I’d say they’re a metal-punk mix of D-beat, Bl’ast, and like, the Germs or Poison Idea. The singer thanked White Lung for taking them out on the road, and then antagonistically threw in, “You guys are really nice. If that’s what you want to be known for…being nice.” Someone in the audience took the bait and yelled out, “Minnesota nice, motherfucker!” Touché.

The Entry is one of the finer venues in this city to see fast and heavy music; it’s dark, intimate, has great sightlines, and is loud as fuck. It was really difficult to gauge the medium age of the crowd. Even though it was 18+ there was a large contingency from the 30s and 40s hip dude crew. As usual the in-between bands set changeover signaled the great stare-at-our-glowing-phones onslaught that is show-going these days. Tallboys of Old Style and Stag beer were on special for $4.00 but coming off a week that has already included Best Coast on Monday, and CJ Ramone and Shonen Knife last night, I steered clear of the bar and kept a level head.

Mish Way and co. took the stage for a brief tune-up—asking the soundman for more reverb in both her mic and the bass monitor— and then blazed into a trio of songs from last year’s Domino release Deep Fantasy: “Sycophant”, “Face Down” and “Drown the Monster.” Even though Deep Fantasy marked the band’s progression into more indie-rock territory, these songs, when played live were done with the ferociousness of their earlier work on Deranged.

White Lung’s hardcore punk meets couture aesthetic is part of the band’s uniqueness and appeal. Way appeared in skin tight leather pants, a designer spiked bracelet, and a slouch neck long-sleeve that hung off her shoulder exposing a tattoo and a black bra strap. Deap Vally’s Lyndsey Troy, who’s filling in on bass for this tour, was also looking exceptionally stylish in her all-over print crew neck sweatshirt and miniskirt.

By the time their second set of tunes came around they were really getting into stride and the audience responded appropriately. The strongest reception of the evening thus far came as a result “Bad Way” and “Bag” which are two tracks from their 2012 album Sorry. The area in front of the stage soon became a reeling dervish of gyrating hips and sweaty foreheads. Way expressed her appreciation. “After driving so long to get here, it’s nice to see you enjoying yourselves rather than standing there with your arms crossed like, ‘I’m too cool for music.’” Then adding, “That’s what they do in Russia.”

Aside from two songs (“Lucky One” and “In Your Home”) they played the entire Deep Fantasy album. The final four songs however, were two standalone singles—“Two of You” and “Blow it South” sandwiched between two from Sorry. Midway through “Thick Lip” Way’s mic cut out. In typical punk rock fashion she powered forward, screaming the lyrics at the top of her lungs as Kenneth William laid his signature squealing guitar licks on thick, and drummer Anne-Marie Vassiliou pounded the skins with thunderous authority.

They ended the set with a vicious version of “Take the Mirror”, said ‘thanks’ and promptly left the stage, never to return. It was an abrupt ending that left the audience bewildered and wanting more. It was funny looking around the room at everybody as it settled in that they weren’t coming back for an encore. But I’m not complaining about a show getting over by 11-ish on a school night. 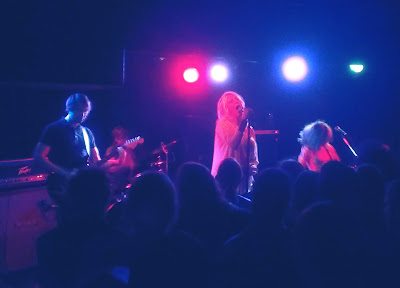 Setlist:
Sycophant
Face Down
Drown the Monster
Bad Way
Bag
Wrong Star
Snake Jaw
I Believe You
Just For You
Down it Goes
Thick Lip
Two of You
Blow it South
Take the Mirror