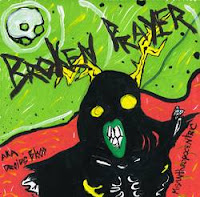 Tweet
There’s two things in particular that contribute to the band’s unique sound. Obviously one is Panella’s synths. Stylistically they are all over the place. They can surge forth with maniacal abandon as they do on “Blood Suckers”, be delicate and melodic like they are on “Colors”, or blister your brain until it feels like a burnt marshmallow that’s still too close to the fire ala “Kid.”

The other driving force is Scott Plant’s vocals. Plant (formally of Civic Progress) flexes the same type of self-loathsome, angry, in-your-face stance that Pissed Jeans’ Matt Korvette does. His lyrics and delivery have a tendency to push buttons, bouncing between societal cynicism and sociopath-like sarcasm. He never goes over the line and says anything outright offensive but he’s not shy about confronting the listener with the realities that this world we live in is just plain fucked up. Songs like “Good Dudes” exists somewhere between Pissed Jeans and Condominium, with Plant’s vocals resembling the latter’s Matt Castore. Meanwhile “Blood Suckers” shows Plant occupying the same headspace as Watery Love’s Ritchie Charles, as he sing-speaks, “This world is a piece of shit. I can’t wait to leave it.” And on “White Children” his needle-poking sarcasm comes to a head, as he asks, “How could God let this happen to white children?”  ...read entire review here.