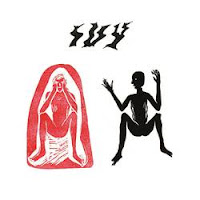 Tweet
Before I heard this I didn’t know a lot about this band other than that they were definitely not the indie-pop trio of the same name. I picked this 7” up based strictly on the artwork, the title, and the fact that Katorga Works is a fairly trustworthy label. Visually-speaking it doesn’t exactly scream punk. And the title, well, who the fuck knows? So why not roll the dice, right? What I found out later is that they’re from NYC, and that this a follow-up to an LP and likely their final release. Ivy play spastic and heavy garage-leaning punk. There's some psychedelic guitar parts that remind me of King Gizzard & the Lizzard Wizard, although subtlety and kind of buried in the mix. In fact there’s so much going on here that it’s intoxicating and, ah, suffocating. And I mean that in the best way possible. It’s like free-form jazz played by punks who inhale nitrous balloons on the regular. Vocals make me think the dude is singing through one of those old-fashioned mics used by like, Elvis or Mike Ness or some shit. Or maybe a telephone like those dudes in Japanther. Eh, whatever, the point is: this totally rules. It’s nice to gamble on something and have it pay off once in a while.  ...Originally posted here.