Tweet
This review is an excerpt from issue #8 of Soda Killers fanzine. I might have a couple copies left. Let me know if you're interested and I'll see if I can't dig one up for you. Otherwise, you can order the most recent issues from the HDD store.

Another one from the stack of tapes and CDs sent in by Luke Sick. If you’ve been paying attention over the last few issues, I’ve slowly been working my way through a box of stuff that included a bunch of Megakut Records tapes, CD-rs from the Clell Miller label, and some Sacred Hoop and Grand Invincible CDs. And let me tell you, it has been a real fucking pleasure. I’m not just saying this because I’ve developed a casual mail-based relationship with Luke either, but Megakut Records is one of my favorite labels right now. Their dedication to cassette releases and old-school-inspired rap music is on point. This Yole Boys megamix appears to be the first Megakut release ever, as it is titled Megakut #1. The J-card doesn’t include a lot of information but it says the beats were done by Fatees and the cuts by DJ Quest. It’s basically a turntable-centric deejay mix void of any actual rap verses. Think of a live mix set you might hear on the rap show on a college radio station in the ‘90s. Or, like, remember when you’d go to a rave back in the day and they’d have one room that was hip-hop beats? No? Well, imagine what it might be like and you’ll have an idea of what this sounds like. Look for a review of the Yole Boys tape Owe.Reep.Out. in the next issue, as well as Luke’s crime novel Cleanhead. 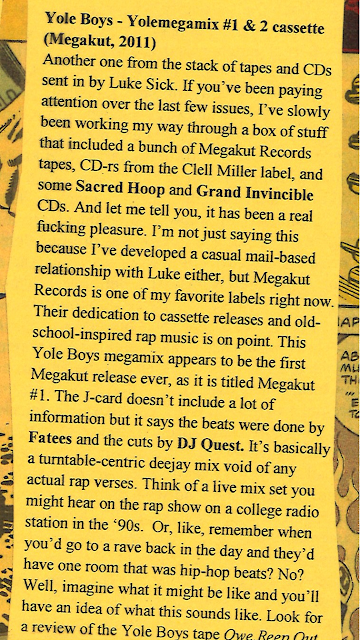