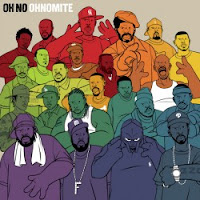 Following two collaborative efforts already this year alongside his fellow beatsmith and emcee The Alchemist as the duo Gangrene—the Vodka & Ayahuasca LP and the Odditorium EP—the West Coast producer and rapper Oh No returns once more for a solo mission with Ohnomite. Oh No—the younger brother of Madlib and son of singer Otis Jackson—was granted unmatched right of entry to the Rudy Ray Moore/Dolemite audio archives—which included legendary material from The Human Tornado, Petey Wheatstraw, the Dolemite Soundtrack and more, plus a multitude of previously unreleased and alternate acapellas and instrumentals. With that access came free rein to sample and manipulate it any way he see fit. The end result is a trunk-rattling chaotic burlesque of witty lyricism and gritty beats assembled from the nastiest fragments of funk, soul and Blaxploitation.  ...continue reading in new window.