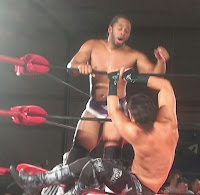 The show opened up with Adam Cole standing in the ring, wearing a fairly cheap-looking suit. He cut a promo but you couldn’t hear much of what he was saying due to poor audio and some zealous fans chanting “Mens’ Warehouse” over the top of him. The gist of it was that he promised to never lose the ROH title and that he thinks Jay Briscoe is a female dog. This brought Jay to the ring, which caused the first huge pop of the night. Jay ran him off and more or less said he would win the title back as soon as his shoulder healed up.

First match was the World Tag Team Championship match, in which the champions Kyle O’Reilly & Bobby Fish (red DRagon) took on the challenging newcomers Josh Alexander & Ethan Page (Monster Mafia.) There was lots of comedy early on, with red DRagon really playing up their role models gimmick. A few people laughed when someone from the bleacher section yelled, “Oh great, these guys. I didn’t come here to see some MMA shit.” Lots of trading back rakes back and forth in a comedic manner. At one point O’Reilly jumped off the top rope, then stopped and gave a simple back rake. Fans in the front row were getting on Fish hard, and it seemed to irritate him, as he eventually yelled at them to, “Shut the fuck up, and let these people enjoy the show.” I found it a bit ironic actually, as everyone seemed to be having fun. Eventually things got serious, as Monster Mafia got a few close pinfalls. Of course red DRagon ending up retaining the titles though; wining with their signature move, Chasing The Dragon. O’Reilly and Fish are growing more and more impressive with each outing; both with in-ring work, and their interactions with the fans. They really know how to get effective heat. Alexander and Page were pretty impressive as well. Alexander is an imposing fella. With a little fine tuning, he has potential to be a strong big man.

Second match was Mark Briscoe in all his Redneck Kung-Fu glory facing “The Last Real Man” Silas Young. It was a pretty decent match, leaning on the hard-style end of things. Cody Rhodes had nothing on Silas Young, as far as mustaches go. Young’s mustache does as much for his real man gimmick as Briscoe’s missing teeth and beard do for his redneck real-life character. Young is another guy that seems to grown leaps and bounds since he first appeared on ROH television. Briscoe got the win but was the recipient of a lengthy beatdown afterwards by Young, which would play into Briscoe’s storyline throughout the evening.

Next match up was Tadarius Thomas & ACH (Adrenaline RUSH) vs. Jay Lethal & Michael Elgin. Lethal and Elgin were over huge with the crowd. Adrenaline RUSH though; not so much. Lethal acknowledged the “Black Machismo”chants, a nod to his famed TNA gimmick, with a little Macho Man posturizing—bent knee shuffle, thumb in the tights, waiving his finger in the air. Other than that though, he looked hurt, or perhaps a bit under the weather. He stayed away from most high spots, and spent lots of time on the apron, as Elgin worked more of the match. ACH is a lot like a young Elix Skipper—lots of high spots, very agile, and a non-stop motor. Tadarius Thomas did all of his innovative Matrix-like moves. But the problem is he takes too long to set them up, so they came across pretty lame live, and the crowd let him know. After teasing it a few times, Elgin came off the top rope with the elbow drop. Eventually he got the pinfall after an Elgin Bomb. You can see it on TV, but it’s even more apparent in person that Elgin is a beast. Reminds me a lot of "Dr. Death" Steve Williams, at least body-wise. He moves really well for a big man but could no-doubt benefit from dropping a few pounds.

The last match before intermission was the Honor Rumble; a 15-man battle royal with Royal Rumble-style rules, where a new man enters every one minute. Nearly everyone on the night's card competed, with the exception of Kevin Steen, Michael Elgin, Jimmy Jacobs, and Eddie Edwards. Jay Lethal and Television Champion Matt Taven started things off. As other dudes started entering it didn’t take long to turn into a clusterfuck of nonsense. The biggest pops came as a result of Delirious, who hasn’t been seen on TV in a long time, and Cheesburger, who got in some quick off-the- top-rope offense. Both were eliminated quickly. Despite receiving another beatdown from Silas Young, Mark Briscoe won it by tossing Bobby Fish, thus winning a title shot versus Adam Cole in the main event.

First match back from intermission was Michael Bennet vs. "Die Hard" Eddie Edwards. Despite getting a fair amount of offense in the battle royal, Bennet barely had any during this match. Most of the match it was Eddie Edwards on the attack. Edwards was really over with live audience. He’s really good at keeping the crowd engaged—when he asks for response, they give it. Eventually Bennet got the win though with a nasty-looking piledriver.

In the next match "The Zombie Princess" Jimmy Jacobs faced off against "Mr. Wrestling" Kevin Steen. Surprisingly, Jacobs was looking to the crowd for some “hus” chants, a nod to his old mini-Bruiser Brody gimmick, but only a few people in the bleacher section engaged him. It was a farily short match but jam-packed with action. A couple of swantons from Steen, one of which missed. Jacobs hit Steen with a huge spear from the apron that was awesome. Steen with the cringe-worthy Package Piledriver for the win. Steen was over huge, as expected. Judging by some of the things yelled by fans, the crowd seemed to acknowledge television story lines that these two had once been partners in SCUM. That means ROH TV is getting over here, at least to some extent. Michael Bennet’s valet Maria Kanellis came out on the mic to distract Steen, who was then laid out with a piledriver by Bennet.

In the semi-main event, Television Champion Matt Taven defended his title in a three-way dance versus Davey Richards and Roderick Strong. Both Richards and Strong got big pops during their introductions despite already competing in the battle royal earlier. Matt Taven, as expected, is largely un-liked. Davey Richards went a little out of character early by doing comedy; toying with Taven’s Hoopla Hotties in a way that would earn you a sexual assault charge in real life. Despite some of the stereotypical valet interferences from the Hoopla Hotties, the match was quite entertaining. Very athletic and pretty hard-hitting, as you’d expect from Richards and Strong. Despite suffering from a bit from a lack of character development, Roderick Strong a total gamer inside the ring. He goes hard, rarely letting up. In the interest of full disclosure, he pointed out my Team Viggity tee shirt, so I’m a bit biased. Davey was of course awesome too, even if the whole wolf-howling thing has grown a tad ridiculous. Taven eventually retained, although I can’t recall how. There was a lot of action near the end and at one point one of the Hoopla Hotties was in an ankle lock courtesy of Richards. Pretty good match overall.

Mark Briscoe, appearing for the third time in the evening, challenged World Champion Adam Cole in the main event. Before the match stared Cole took to the mic to say he was going to do four things in this match. “First one is…” he said, just as he super-kicked Briscoe. He started the beatdown as the opening bell rang. I was starting to lose steam so I don’t recall a lot of specifics from the match, other than at this point in the evening Briscoe’s Redneck Kung-Fu gimmick began to wear thin. Adam Cole’s facials were excellent. He was really owning his heel character, as he gave the crowd several sly-evil-guy smiles. Despite the valiant effort of a guy who had been battered throughout the night, Cole retained. Afterwards Michael Elgin ran-in which caused Cole to flee over the railing. He was met in the crowd by a waiting Jay Briscoe. I couldn’t see much from my vantage point, but I think they brawled briefly before being separated by the ROH wrestling school students. Then Briscoe battled with the students, and was not shy about laying in hard shots. Several of the trainees received real punches to face. About the only staff member that didn’t get it was the merch guy, who happen to be wearing glasses. Clearly Jay is a professional. Elgin, who was still in the ring, held up the belt and promised this was an image you would see in the future.

Overall I thought it was a really excellent show and lots of fun. I was a little disappointed that some of the ringside-area seating was not filled and that the event was held out in the suburbs, rather than in Minneapolis or St. Paul, where it may have drawn more people or, at the very least, had been accessible by public transportation.  That and there was no concessions aside from stale potato chips, melting candy bars and warm water.  They could have at least brought in some pizza for slice sales and a cooler to keep the water cold. A lot of money to made there - they were literally throwing money away by not having better concessions.  But other than that, it was great to have ROH back in the area for the first time since Brian Danielson and Nigel McGuiness went an hour in 2006. I had a buddy with me that is an avid WWE and IMPACT viewer but has never seen a lick of ROH before tonight.  He said it was the best wrestling he’s seen, whether on TV or live, in a long time. I am inclined to agree. 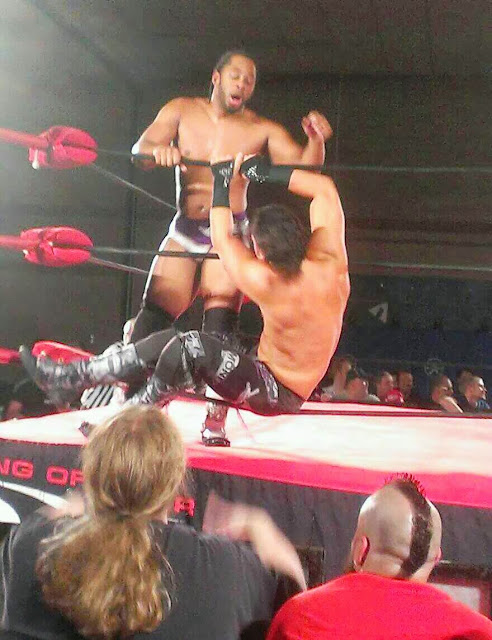 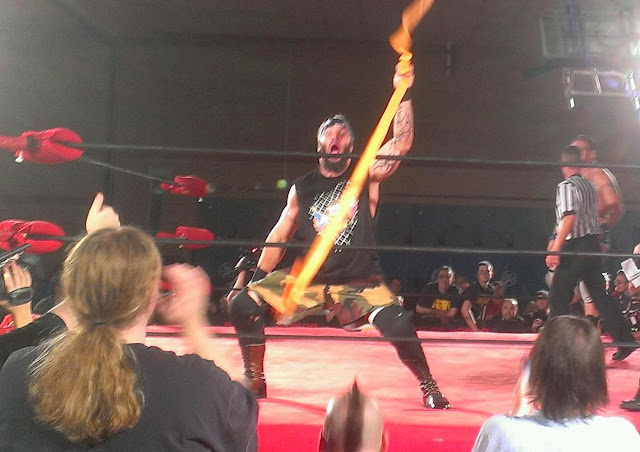 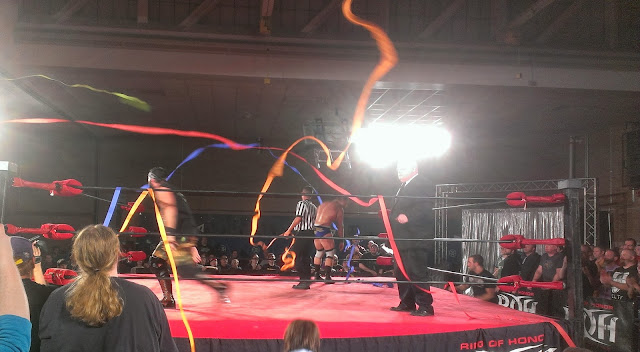 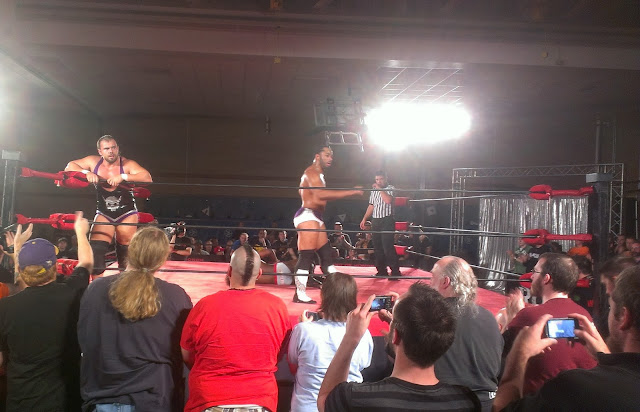 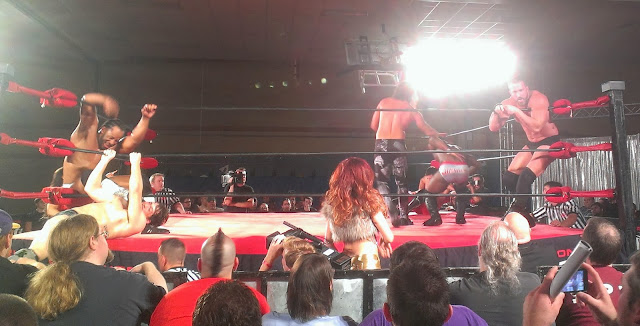