Thoughts on Jeff Hanneman and Slayer

The following Cheyenne B piece first ran in The Soda Killers issue #4, which there are a very limited number of copies still left of. Get in contact if you're interested in receiving one.

Thoughts on Jeff Hanneman and Slayer
By Cheyenne B.

5/15/13
The last time I caught a Slayer show was on the 2010 tour with Megadeth and Testament, where they played Seasons in the Abyss, start to finish. Despite catching a lot of shit from some of the more pretentious Slayer fans, I think Seasons is a solid album that houses some really vicious tunes, so I was pretty stoked on it and had a kickass time. That was almost three years ago now, and up until that point I had seen Slayer at least once every other year, if not more, since I was 12. It wasn’t until a few weeks ago that I realized that particular show was my last Slayer concert ever, under the circumstances that guitarist Jeff Hanneman passed on earlier this month due to cirrhosis of the liver.

No one can say for sure what Slayer’s next move is going to be as far as writing and touring goes, but I think it’s safe to predict that I will never see Slayer live again. Even if they don’t call it quits and keep on truckin’ sans Hanneman AND drummer Dave Lombardo, I have no desire to see the remaining weakest links plus a couple of hired guns pretend to be Slayer. See, at that last Slayer gig I saw, singer and bassist Tom Araya and guitarist Kerry King were just going through the motions. Araya couldn’t belt out a warcry like he used to, King was butchering solo after solo, and when they weren’t doing that, they were just standing there. Even Lombardo was a little lax on the skins. I realize that those guys are getting up there in age, but the severe lack of effort was disheartening. However, Hanneman was up there bangin’ it out and nailed it. Now I have accepted the fact that I will have to listen to Show No Mercy on loop playback for all eternity in lieu of ever seeing them live again.

So why does the death of a person I didn’t even know have any sort of effect on me? Well, because Slayer was my gateway drug into everything metal and punk. It was somewhere in my early preteen years that I rerouted my life down the Left-Hand Path, and I can at least partially, if not fully, attribute that to Slayer. At that point in my life I was suffering an identity crisis and needed to escape from the monotony and torture of the pop vomit that infiltrated the minds of my middle school classmates. When I first heard Slayer, I wasn’t anywhere near prepared for it. The song was “South of Heaven,” from a mix CD that a friend burned for me - I was just decimated. I didn’t know that kind of music was allowed. It awakened new levels of discomfort and anxiety, as well as rage that made me just want to get up and start breaking shit. That was exactly the contradiction of emotions I needed to get me through my middle school identity calamity. Since then, Slayer has been a staple through every phase of my life. I can directly link the band to some of my best memories.

Hanneman’s music has had a profound impact on multiple generations of metalheads and punks alike. Everyone from my 11 year old nephew, who I have forced Slayer upon since he was just a tyke, to my more middle aged friends who have worshipped Slayer since the tape trading days, has been cranking their favorite Slayer albums in mourning remembrance. My personal choice has been Show No Mercy. Hanneman’s riffs and compositions were truly a driving force in shaping the future of underground music and spawned infinite legions of metal and punk bands for years to come. He will be dearly missed.

It’s the beginning of the end of an era. All of my heroes are dying. 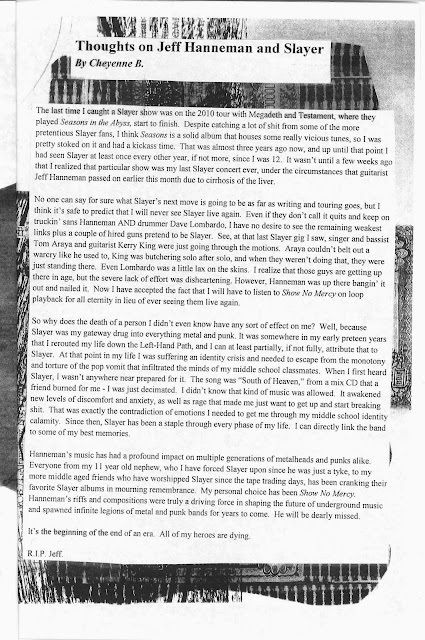