The following Doomgoblin piece first ran in The Soda Killers isssue #4, which there are still a very limited number of copies left of.  Get in touch it you'd like to get one.

Thoughts on the Neutral Milk Hotel Reunion
By Doomgoblin

4/29/13
The Internet just told me that Neutral Milk Hotel got back together and has five shows scheduled. I’m not one to get excited about reunions, but this feels a lot different.

I used to check out CDs from the library in my hometown all the time. Whoever was responsible for buying CDs for the library back then really snuck some gems in there. So I was browsing the collection and I came across this bizarre looking CD. There was a chick in a dress with half a coconut for a head or something. The colors were muted and dreamy and I decided to check it out because I was 15 or 16 and it looked cool. The band name was just as mysterious as the artwork. What kind of band calls themselves Neutral Milk Hotel?

I took it home and sat in my bedroom and listened to it for the first time. I was confused as hell. The guy can barely sing, the horns are unbearably out of tune, and the lyrical content made no sense. But I couldn’t stop listening to it. And the more I listened to it, the more I loved it. The best records are always like that, it seems. Things that take a couple spins to really get under your skin. Not that I refuse to embrace music that is instantly enjoyable, but it just feels more satisfying when you have to put a little more work into it. So I found this record that I knew absolutely nothing about. I didn’t know if I was supposed to love it or mock it. I was a total tabula rasa, you know? It’s been a long time since I’ve listened to something without any preconceived notions about how I should feel about it.

I was young and I was just starting to really explore music. I was never attracted to top 40 radio, so I just listened to oldies stations and Broadway cast recordings. I started by checking out the musicals from the library. Do you remember those bulky double CD cases? Yuck. Then I moved to the classical section, and the jazz section. The rock section was kind of my final frontier. I didn’t like most of the stuff I picked out, but Neutral Milk Hotel, Radiohead, Cat Power, and Elliot Smith were my gateway drugs. So thanks old library! Thank you for planting the seeds that made me want to discover more music.

I’m so excited about this whole NMH reunion because I never thought I’d ever see them live. They broke up/went on hiatus/whatever shortly after In the Aeroplane Over the Sea was released. Everything I read about them at the time (2002ish?) suggested that Jeff Mangum was a total recluse and it was highly unlikely that we’d ever hear from them again. It’s probably still highly unlikely that I’ll see them live. Even if they do eventually make it up to Minneapolis, I’ll probably forget to buy tickets and then not remember the show is even happening until the day of when it’s too late…unless I can convince someone to get me in for free. Because that’s how I roll. I completely suck at going to shows. But that isn’t the point! The point is that I’m being all nostalgic and happy that they’ve decided to play a couple shows in places far far away from here.

I’m Faster Than My Shadow 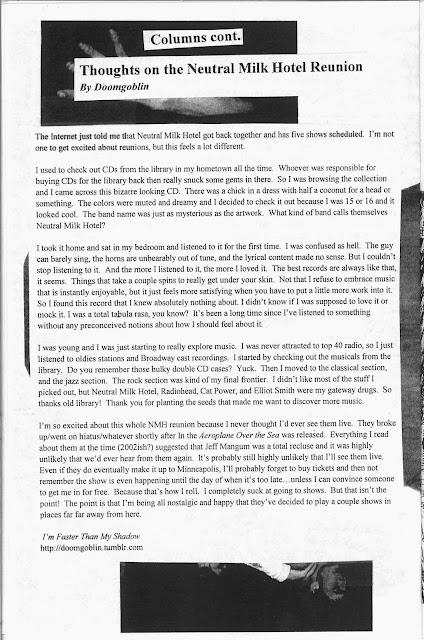