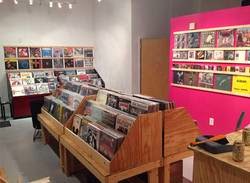 Since 2005 Sorry State Records has grown from a small boutique label into one of the most dependable, well-curated record distributors in the global punk & hardcore network. While the label maintains a heavy contingency of bands from their home state of North Carolina, they've also released records from a number of bands from around the world. 2013 was a banner year for the label, as not only did they open up a storefront in their hometown of Raleigh, but they released highly acclaimed records from the likes of Nö Pöwer, Joint D≠, Broken Prayer, Rough Kids and others. Sorry State owner and operator Daniel Lupton took some time to talk with me about running the label.

What was the catalyst that got you into punk and hardcore? Is there moment in time that you can pinpoint?
I think I took a similar path to a lot of people my age (I’m 34). I was super into skateboarding as a kid, and was around 12 when Nirvana really blew up. Being a curious kid I just followed the breadcrumb trail that led me to heavier and more intense stuff. So from Nirvana you get into Sonic Youth and Mudhoney, and eventually you make your way down to Black Flag and Minor Threat, which is the stuff that really blew my mind. I knew I was hooked when I first heard Minor Threat. If there’s a moment I can pinpoint it’s definitely that. It was just the rawest, most intense, and best music I’d ever heard in my life. I’ve often said that every subsequent record I’ve ever bought in my life is just chasing after the bliss of that one moment when Minor Threat completely blew my mind.

Before you started Sorry State were you involved in the punk scene in other ways – zines, bands, etc.?
Sort of. I used to do an online zine called Deep Fry Bonanza that had a small but dedicated following, and then that kind of mutated into a blog called Dead Metaphor after I got tired of writing about crappy promos all of the time and wanted to focus more on the music I was actually excited about. I put a lot of work into those sites. I think I probably wrote close to 2,000 record reviews for Deep Fry Bonanza, many of which were well over 1,000 words. However, because those things were online I still never really felt like part of the scene…I was still a spectator. I think part of that was also coming up in the Richmond, VA area. The scene there is kind of insular and I’m super shy by nature, so I just never found my way in.