One Way Ticket to Flavor Town: A Misguided Foodie's Journey Thru the Shitpile That is Guy Fieri's Opinion 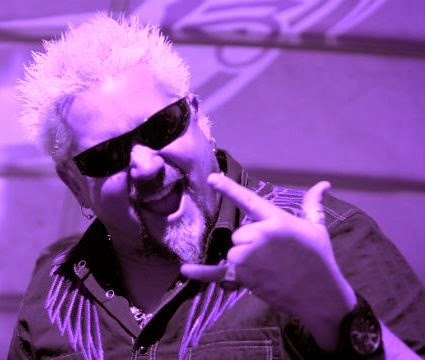 The following Vincent Kisea piece first ran in The Soda Killers isssue #6, which there are still a very limited number of copies left of.  Get in touch it you'd like to get one.

Let me start this off with a little background info on me the writer.  I am a Seattle native with deep love for my city and all that it has to offer.  I am in no way a veteran when it comes to writing, but when Nathan (from the now world famous “This is 40” mantra) asked me to contribute to his body of works via Northwest affiliate, I was more than a little flattered.  I have lots to say about lots of things Northwest and will be submitting my work more regularly as time goes.   I am not yet 40 so my input may be a little more relevant and cutting edge than you the reader are used to.  Although I am only a few years away from the inevitable number forty, my vast knowledge in Anime, K-pop and everything that is Selena Gomez keeps me deeply in tune with the happenings of every day youth.  BTW did you see what that slut was wearing at the Oscars Yeah neither did I.  But alas this article is not about me and how fucking hip I am, but is a peak behind the curtain.

It is a look at a show that most have seen but few admit to seeing.  It is the glorious Diners, Drive Ins and Dives, the celebrated porn of the Food Network if you will.  If you are not familiar, I will give you a synopsis.  A man (definitely in his 40s) with frosted tips and a sweet muscle car tours around the country finding the “best” diners , drive ins, and dives and showcases a few items off the menu that are noteworthy. And by noteworthy I mean the greasiest, largest, highest calorie food they have listed.  Not all establishments he visits are gut-busting greasy spoons, but they definitely don’t shy away from them.

One of those establishments is a historic site in Ballard (North Seattle) called Mikes Chili Parlor.  It is the oldest building on the block, and is standing precariously between a couple of new big buildings.  It has been there since 1922.  It almost looks cartoonish how it is situated between all the new constructions.  Now the show and its leader Guy will lead you to believe that the chili made here is unparalleled and much better than all the other chili that they have featured.  Here is the problem: it is not.  I would like to start off by saying that this is a dive bar that serves chili.  As a dive bar, I love the place and will always go back, but as a chili manufacturer…meh.

The first time I ever went to try Mike’s chili I was around the corner on a construction job alongside my fellow Mexican coworkers.  Luis Carmona and I made a point to eat lunch together and I talked him into joining me at the chili parlor because of the show’s recommendation.  I had been there before but only to drink.  We were immediately drawn to the offering on the menu of chili served over spaghetti noodles.  Now I am sure that is common place in an ass-backwards town like Cincinnati, but this…this was dam near anarchy in our neck of the woods.  I ordered the chili with noodles and Luis ordered the chili dog.  I am a reader of things like books, warning labels, street signs, and body language.  I was reading Luis’ body language and I could tell that this was No Bueno.  Before I could even get a fork full of rolled up chili-covered noodles, Luis had taken a bite of his chili dog and not only spit it out, but had started scraping the chili off of said chili dog.  Now I know what is in a hot dog and I am sure Luis in his worldly travels has heard children whisper of the ghastly horrors that make up a hotdog.  So when one pushes another food away to get at the food that makes up a hotdog, then my friend, there is a problem in Houston.

The bartender saw this and immediately took this as disrespect.  He questioned Luis and asked if he was “too good” for the chili he was served.  Luis has broken English at best, but when Luis finally realized what the bartender had said it was too late.  The bartender had taken the basket away and asked us to leave.  I think I was on my second bite and looked at the bartender trying to bait him into taking my bowl while I was currently getting another bite.  Luis immediately started a cussing tirade in Spanish and wanted desperately for the sickly bartender (he must have been living off the chili alone) to come around from the other side of the bar for some foreplay.  I immediately took two more bites of my chili noodles from sheer hunger and flung the bowl of chili at the bartender yelling that he was a racist and that Guy Fieri would be hearing from us; although he never did.  We went back to work with a funny story.

All I could think about the rest of the day was why was that guy was so quick to get offended by Luis’ dismissal of the chili?  Why did it escalate so quickly, and why in the hell were there no beans in the chili?  These were all valid questions.  My answers were these. The bartender’s actions were a direct result of more than one customer complaining or not liking the chili.  Why there were no beans in the goddam chili is beyond me.  If I wanted a Mexican meat sauce, then I would have asked for it.  And by the way my Mexican friend acted, the chili wouldn’t have even been an okay Mexican meat sauce.  So next time you watch this show just remember, not everyone has the same tastes in food, hair, or hot rods, and not everything on TV is the bomb.com.