Tweet
This review is an excerpt from issue #8 of Soda Killers fanzine. I might have a couple copies left. Let me know if you're interested and I'll see if I can't dig one up for you. Otherwise, you can order the most recent issues from the HDD store.

This a rad sample-based hip-hop odyssey mix crafted by the Bay Area’s Spexxx and Brewmasta (D.F.S.) that continues from one side of the tape to the next, for a total run-time of something like 18-20 mins. It’s comprised of recognized samples of Sesame Street’s Bert & Ernie, Married With Children, and Dave Letterman, who kind of narrates the whole thing.  At one point he’s sampled as saying, “I don’t get this rap music” while some dope drums are looped beneath it. What’s not to get Dave?! There are snippets of various rap songs interspersed; although I’m not sure which ones they are. Most of them sound very familiar; like some late ‘90s/early ‘00s indie backpack stuff, which is an era of rap that I look back fondly on these days. Every rhyme that is sampled is about crate digging. Love that this was made without the use of computers too. When I’m chilling in the back yard on a summer day with a couple brews, my Sony boom box, a pile of zines, and a stack of tapes, this one is always near the top. The mix ends with a sample of Letterman asking the question, “Is there entertainment in hell?” I don’t know that answer to that ‘cause this shit right here is heavenly. 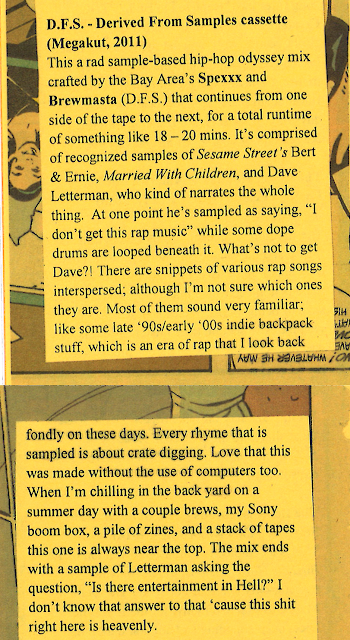